So, I recently had a bit of a panic.  This is not new in my life (it happens at least several times a week) but this one was pretty major.   An explanation:

Since we announced our plan for the house online, we’d had friends and family act totally amazed.  We kept hearing “there’s no way you can live in 500 sqft!”  (Never mind that people are doing it in cities all over the world).  When I would argue back, the discussion would eventually return itself to the business.  Basically the general consensus is that we may be able to live in 500 sqft, but we can’t live and run a business in that sized space.

I started thinking about it more and more until it was monopolizing my thoughts.  (Wayne can attest to this).  So, I did what any rational person does when faced with appears to be an insurmountable space-related obstacle: we visited our local Ikea.

It had been ages since I’d been in Ikea, but I knew they had floor plans set up that you could walk through.  I wanted to find something similar to the size we were planning on to look at the layout and see how it worked.  How exciting for us to walk in and find one that was just slightly larger.  It had a kitchen, sitting area, bedroom, bathroom, and nursery.  When we first arrived, we wandered around it a few times and took pictures.  Here’s the kitchen.  I love that the front room blends together.  Although we currently have an open floor plan, the kitchen is blocked from the sitting area by a wall.  This would make it much easier for us to be doing production and working on the computer, or even just chatting.

Here’s a view of the sitting room and kitchen together.  Quite spacious.  We both loved the couch.  Room for people AND dogs….what genius thought of that?!?  :)

Standing in the front room and looking back you see the hallway.  Straight in front of you to the right is the bedroom.  To the left of that is the nursery, and before you reach the nursery, the bathroom is on your right.  I wasn’t a huge fan of this part – it just seemed a little awkward. 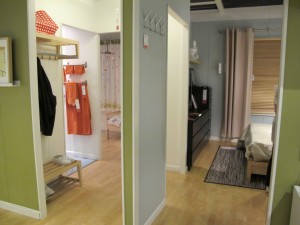 The lovely lady at Ikea (who thought I was completely nuts) actually gave us a copy of the layout, but it didn’t include any measurements, so I decided to try to measure and draw out a modification of the plan while we were there.  The couch was pretty comfy, so Wayne was happy.  There was even a TV on that he watched while large groups of people wandered through our future home.  Let me tell you, it feels larger when all the people leave.

I had to make a few changes.  First, the nursery will become the soap room.  We have four racks right now and are quickly outgrowing that number, so we’ll need all the space.  Second, as I mentioned above I wasn’t a huge fan of the open hallway/bathroom/bedroom thing they had going on.  If we’re going to put in a wood stove, I think the room will need a move solid divide.

It still needs a bit of tweaking (I may shift the bathroom around to fit the washer/dryer in there), but here’s where I am so far (click for a better view):

No closets, so we’ll need open shelving.  I’m hoping that will force me to be neat and not accumulate extra stuff we can’t store.  We’re working on cleaning out the house now, and this is a fantastic motivation.  Overall, it’s not too shabby right?  And it’s pretty close to the size we originally had in mind (around 560 sqft) .  The best thing is knowing how it will likely feel inside (adding a few doors, a roof, and subtracting 15 people or so).  I am confident that we can live in it comfortably and still have room for the business.
So, it was a decent use of an afternoon off.  Wayne sat still and watched golf, I can now sleep at night, and (as if that wasn’t enough), we got to take home a cinnamon bun.  Ikea, we owe you.