We have known for some time that there are unique challenges to trying to grow crops on our land before we had moved out there.  We thought we had most of the bases covered: plant a hearty crop that doesn’t require daily care, plant a crop that doesn’t have a small harvest window and plant a crop that will build up the soil for future crops.  We didn’t think about the fact that with all the readily available vegetation around our land that the local deer population would consider our 400 bean plants such a delicacy.  We were wrong.

For any city slickers who aren’t sure what is wrong with this picture; there should be leaves on those stems.  :)  I wasn’t really sure what to do so I decided  just to weed and mow and hope that the plants survive.  If not, they will have served part of their dual purpose: to fix nitrogen in the soil for fall planting.

About a week ago we decided to plant a row of flowering perennials on each end of the garden rows to attract beneficial insects and create a more balanced eco-system.  Ironically, the deer decided to avoid those completely. 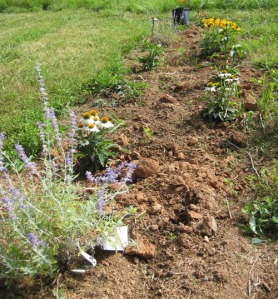 The flower varieties that we have added so far include Russian Sage (Wayne’s favorite), Agastache, Coneflower, and Anise Hyssop.

The second chore for the day included checking on the bees and putting in some new wired foundation.  When we put the frames in the hives we include a thin layer of wax (known as foundation) so the bees are able to get a head start on building out their comb.  The foundation we put in when setting up these hives had no wiring in it so when it got hot the wax softened and flopped over creating a less than ideal environment for our bees.  You can read more about that little oopsie at our other blog –  Julia’s Bees.

Here is a picture I took looking between the tops of two frames, into the hive. 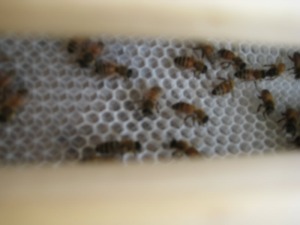 You can see the layer of wax that is laying down across the bottom of the frames.  Normally this would be standing up in the frame as demonstrated in the picture below.

After getting the slight bee problem corrected, I took a break.  I normally like to walk around the land and take a picture or two to share but 3+ hours in the sun convinced me that it would be best if I just sat down and relaxed.  While doing this I snapped a shot of the open portion of our land. 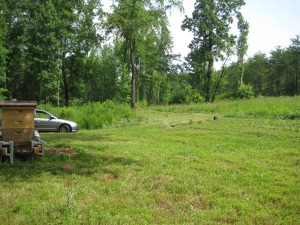 I like this picture, because it includes the bees, the beans (sans leaves thanks to the deer), and the blueberry plants (a bit hard to notice but in the clearing on the far side of the picture).  My goal is to get the grass down to where it is manageable by the end of summer so we can do a sizeable fall planting of bushes, trees, and winter crops.  Wooohooo!